Paulig donates over 1100 protective masks, 3700 gloves, 2400 protective arm sleeves and a host of other protective materials to health care officals in Gothenburg, Sweden. The equipment will be used by hospital staff in the region.

Paulig employee Bo Jonsson got the idea of donating protective gear when he visited the company’s facilities in Mölnlycke, Sweden.

- I noticed that we had a lot of protective gear stored at our facility in Mölnlycke, where we currently have no ongoing production. I thought about the challenging situation for the health care system and realized that the equipment could come to use for hospital staff, says Bo.

- I think many of us feel a bit powerless in this situation. But everyone can contribute in their own way and I am convinced that together, we can make a difference, says Bo.

Last week, Paulig delivered Friday tacos to Ronald McDonald House in Gothenburg, an initiative that was also appreciated, both by the recipients and Paulig's employees.

- The food industry has an extremely important role to play in this crisis. We need to make sure the store shelves are filled. But, if we can do something extra, then we should do it. We have seen a lot of fantastic initiatives in the industry that have inspired us. Now we hope to be able to keep that ball rolling and inspire others, says Eva Berglie, Communications manager, Paulig Scandinavia & Central Europe. 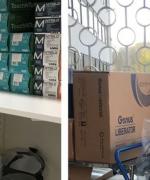