Developed in partnership with Tom of Finland Foundation, the line is comprised of two selections, ground or whole coffee beans, each packaged and available in four different packaging designs featuring drawings by the artist. Dubbed “BUILT BOLD” and “HEAVY DUTY”, the coffee’s dark roast flavour is representative of the allure of TOM’s Men; unapologetic, self-aware and boastfully proud. With an intriguing blend of Arabica beans, the taste is dominated by Mexican flavors, mixed with Brazilian and Colombian notes and nuanced with an intriguing nutty tone. All Robert Paulig Roastery coffees are slow roasted in small batches, for enhanced body and taste.

The line is a continuation of the unprecedented shift in perceptions of the visual iconographies that shape our domestic lives. Coffee, a product that has inherently been marketed to appeal to the nuclear family, has now found a place to manifest universal respect, tolerance and equal rights.

With the Art Roast series, Robert Paulig Roastery wants to inspire everyone to expand on the experience of drinking coffee. “For us Finns, coffee is almost sacred, and we often go for familiar and safe products,” says Oranen. “We encourage you to turn your coffee drinking into an adventure, and take TOM’s Men along with you for the ride”.

“To be able to see the work Tom of Finland, key protagonist for sexual liberation and human rights, in the aisles of supermarkets and department stores can be life changing, and we hope it will influence the younger generation to embrace all personal identity”, says Durk Dehner, cofounder and president of Tom of Finland Foundation.

The Tom of Finland coffee will debut in Finland, at Kesko’s retail stores and also soon  at the Robert Paulig Roastery’s online store (www.robertpaulig.fi ). The coffee will also be available at Kunsthalle Helsinki in conjunction with the upcoming exhibition Tom of Finland, running from 7th of May to 7th of August, 2016.

Founded in 1987, Robert Paulig Roastery is a small, coffee roastery operating in the village of Tolkkinen in Porvoo, Finland. It roasts its coffee beans with a slow roast method, which brings out the most subtle flavours of the coffee and ensures an exceptional coffee experience. An uncompromised appreciation for coffee is maintained throughout the production process, from the carefully selected raw beans to the brewed cup. Robert Paulig Roastery’s products include Watsa coffees, flavoured coffees, single estate coffees and the Art Roast coffee series.
robertpaulig.fi

About Tom of Finland

(Touko Laaksonen, Finnish 1920-1991), is the creator of some of the most iconic and readily recognizable imagery of post-war gay culture and is regarded as one of the 20th century’s most influential artists. He produced thousands of images beginning in the 1940s, robbing straight homophobic culture of its most virile and masculine archetypes (bikers, hoodlums, lumberjacks, cops, cowboys, and sailors) and recasting them through deft skill and imagination - unapologetic, self-aware, and boastfully proud. 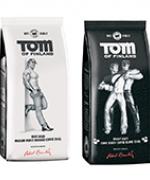